Vicky Kaushal was spotted dancing to his wife Katrina Kaif’s dance tune Chikni Chameli at the unveiling of the trailer for his forthcoming movie Govinda Naam Mera. The video must be seen!

Without a doubt, one of the most adored couples in Bollywood is Vicky Kaushal and Katrina Kaif. The couple wed in December of last year, and since then, they’ve been posting some gorgeous, romantic photos on Instagram. The two are frequently seen praising one another and encouraging one another’s creative endeavours. Vicky Kaushal will soon appear in the Kiara Advani and Bhumi Pednekar-starrer Govinda Naam Mera. Vicky was spotted dancing to his wife Katrina Kaif’s dance tune Chikni Chameli at the release of the Govinda Naam Mera teaser.

At the premiere of the teaser, Vicky Kaushal was accompanied by his co-stars Kiara and Bhumi. Karan Johar presided over a game that required the participants to both guess and execute the song’s hook steps throughout the event. In a social media video going viral, KJo declares that Vicky would perform to his “dharam patni” Katrina Kaif’s big songs. After then, Vicky may be seen momentarily bopping to the tune of Kala Chashma. He also flawlessly executed the hook dance from Katrina’s hit song Chikni Chameli.

Vicky was applauded warmly by the audience as he danced to Chikni Chameli. Watch the video down below.

Response from Katrina Kaif to the Govinda Naam Mera trailer

Vicky’s movie Govinda Naam Mera’s trailer was released by Katrina Kaif, who also thanked the whole cast and crew. It “seems too enjoyable,” she wrote. Vicky responded by dropping a love emoji and writing “My Love” below this. After the release of the Govinda Naam Mera teaser, Vicky could be spotted leaving the location. When the press questioned him about Katrina’s opinion on the movie’s poster, he grinned and responded, “Accha laga.” Additionally, they requested that they both share screen time at some point in the future. Vicky said, “Aap log generate karo,” and smiled sweetly.

Concerning Govinda Naam Mera
Vicky Kaushal, Bhumi Pednekar, and Kiara Advani play the key characters in Govinda Naam Mera. Shashank Khaitan wrote and directed the movie, which is being made by Dharma Productions. 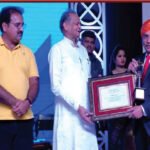