Earlier today, November 11, Prime Minister Narendra Modi arrived in Tamil Nadu for the 36th convocation of the Gandhigram Rural Institute (GRI) in Dindigul. MK Stalin, the chief minister, met him at the airport and gave him a shawl and the English translation of the Tamil novel “Ponniyin Selvan.”
The Tamil Nadu CMO tweeted a photo of CM Stalin handing the acclaimed book to PM Modi along with the caption, “Hon’ble Chief Minister MK Stalin was crowned by Hon’ble Prime Minister Narendra Modi who visited Dindigul district to participate in the 36th convocation ceremony of Gandhigram Rural Virtual University.”
The novel Ponniyin Selvan, written by Kalki Krishnamurthy and published in the 1950s, is regarded as the author’s masterpiece. The book, which was initially written in Tamil, is a work of historical fiction based on occasions that took place during the Chola kingdom. Notably, Mani Ratnam, a director, adapted the novel into a film, which he released in theatres and on streaming services in October of this year.

He stated that the fact that Mahatma Gandhi considered khadi to be a “instrument of self-governance” in villages motivated the government to aim for Aatmanirbharta (self-dependence). “Khadi had endured years of neglect. However, after the slogan “from khadi for the nation to khadi for fashion” gained traction, sales of the fabric increased by 300% over the preceding eight years “declared PM Modi.
Notably, PM Modi also gave gold medals to four winners. The university also conferred honorary doctorates to artist Ilayaraja and Carnatic music performer Umayalpuram K Sivaraman. 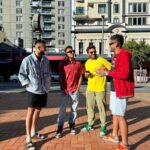